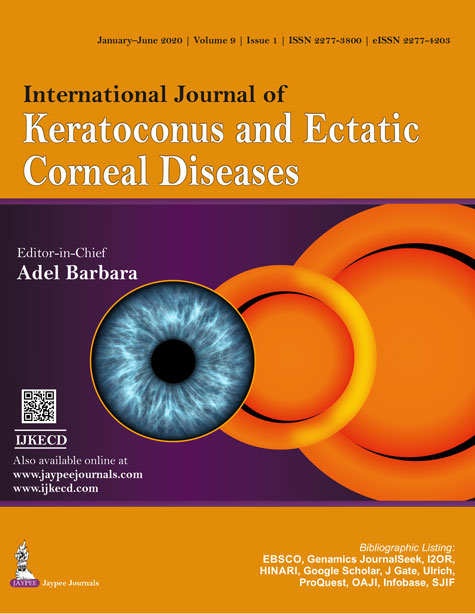 Background: Although classically described as a noninflammatory disease, recent evidence suggests that chronic inflammation may play a role in keratoconus pathophysiology. Continued eye rubbing is well established on ectasia development, taking part in the “two-hit” hypothesis, which combines the concept of intrinsic biomechanical susceptibility and external stimuli decompensating the structural integrity of the cornea. Aim and objective: To describe a case of very asymmetric bilateral keratoconus requiring different approaches on both eyes. Case description: A 14-year-old patient with a history of atopy and intense eye rubbing was referred for a cornea consultation because of low vision accompanied with pruritus on both eyes and pain on the left eye. Corneal hydrops was present on the left eye. A diagnosis of grade II keratoconus was established for the right eye. Distance-corrected visual acuity (DCVA) was 20/70 in the right eye and count fingers at 1 meter in the left eye. After 1 month of avoiding eye rubbing, topical mild steroids, and anti-allergic prescription, the patient referred significant improvement in both eyes. DCVA was 20/30, and flattening of 2.5D in the anterior curvature was noted in the right eye. Three months later, ectasia progression was detected in the right eye, and transepithelial cross-linking was performed. More than 6 years after the procedure, the right eye maintained visual and tomographic stability and the left eye had resolution of edema with residual stromal scar. DCVA was 20/30 in the right eye and 20/40 in the left eye. Anterior corneal curvature maintained stable, with a overall decrease of 2.1D in the right eye and 40.9D in the left eye. Conclusion: In the presented clinical case, avoidance of eye rubbing and topical anti-inflammatory drugs were followed by spontaneous partial regression of the ectasia, delaying the necessity for a more invasive treatment. When progression was documented, transepithelial corneal cross-linking was effective in halting disease progression, with topographic stability for more than 6.5 years follow-up period. Clinical significance: Avoidance of deleterious factors like eye rubbing in keratoconic eyes is crucial for clinical stabilization or even improvement. Anti-inflammatory therapy may play a role in ectasia stability.