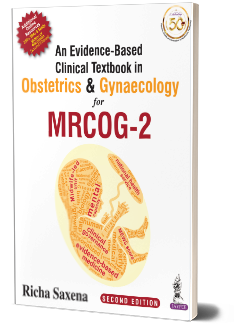 An Evidence-Based Clinical Textbook in Obstetrics & Gynaecology for MRCOG-2

The second edition of the book “An Evidence-Based Clinical Textbook in Obstetrics and Gynaecology for MRCOG-2” has been primarily inspired by the success of the first edition. Similar to the previous edition, the second edition has also adopted an evidence-based approach, especially focussing on the current standards in health care. The previous categorisation of the book into three parts: general, obstetrics, and gynaecology as well the pattern of previous sections have been retained in this comprehensive new edition. This new edition comprises of 98 chapters, distributed into 17 sections and is based as per the current MRCOG-2 curriculum available from the RCOG website. Nevertheless, there has been an addition of several new chapters such as thromboembolism in pregnancy, genetic disorders, postpartum collapse, Zika virus infection, etc. COVID-19 and its management during pregnancy have also been discussed at length in this new edition. Addition of online content is another new value-adding feature of this book. The references of each chapter can also be accessed online by scanning a QR code. The text in each chapter has been organised in the form of a predefined template, including headings such as introduction, aetiology/indications, diagnosis, differential diagnosis, management, complications, and evidence-based medicine. A new heading, titled ‘key features’, has been added to all the chapters in the new edition.

Chapters of the selected section will be displayed in the chapter section below.