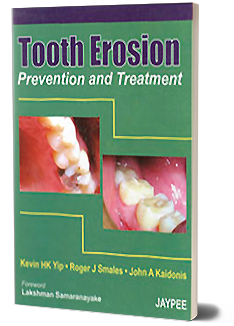 Acid erosive tooth surface loss is increasingly being reported in several countries, and also is becoming recognized as a significant cause of tooth destruction in persons with symptoms of xerostomia arising from hyposalivation. The primary etiology is related to a high consumption of dietary sources of acids, and also to an increasing awareness of gastric acid as a significant factor in both children and adults. In some instances, the presence of tooth erosion may allow dentists to make the initial diagnosis of gastro­esophageal reflux disease (GERD), which is a major cause of intrinsic acid erosion. Erosion can be exacerbated by hyposalivation induced by dehydra­tion, many drugs and several systemic conditions. Recommended preventive dental treatments aim to neutralize the effects of acid, reduce the severity of drug-induced and other causes of hyposalivation, stimulate salivary flow and buffering capacity, and increase the acid resistance of tooth substance. Initial restorative treatments should be conservative, using adhesive dentistry techniques.